The Kentix SmartXcan has been helping to keep our team safe during the ongoing COVID-19 pandemic. Paired with an access control system, you too can create a smart solution which can limit access for people whom’s body temperature may be higher, helping to reduce the risk of transmission. We’ve taken a look at access control systems and how the Kentix SmartXcan can integrate with your existing infrastructure.

However, with the rise of COVID-19, an access control system based only on access permissions may no longer be enough. This is where the new SmartXcan unit from Kentix comes in. 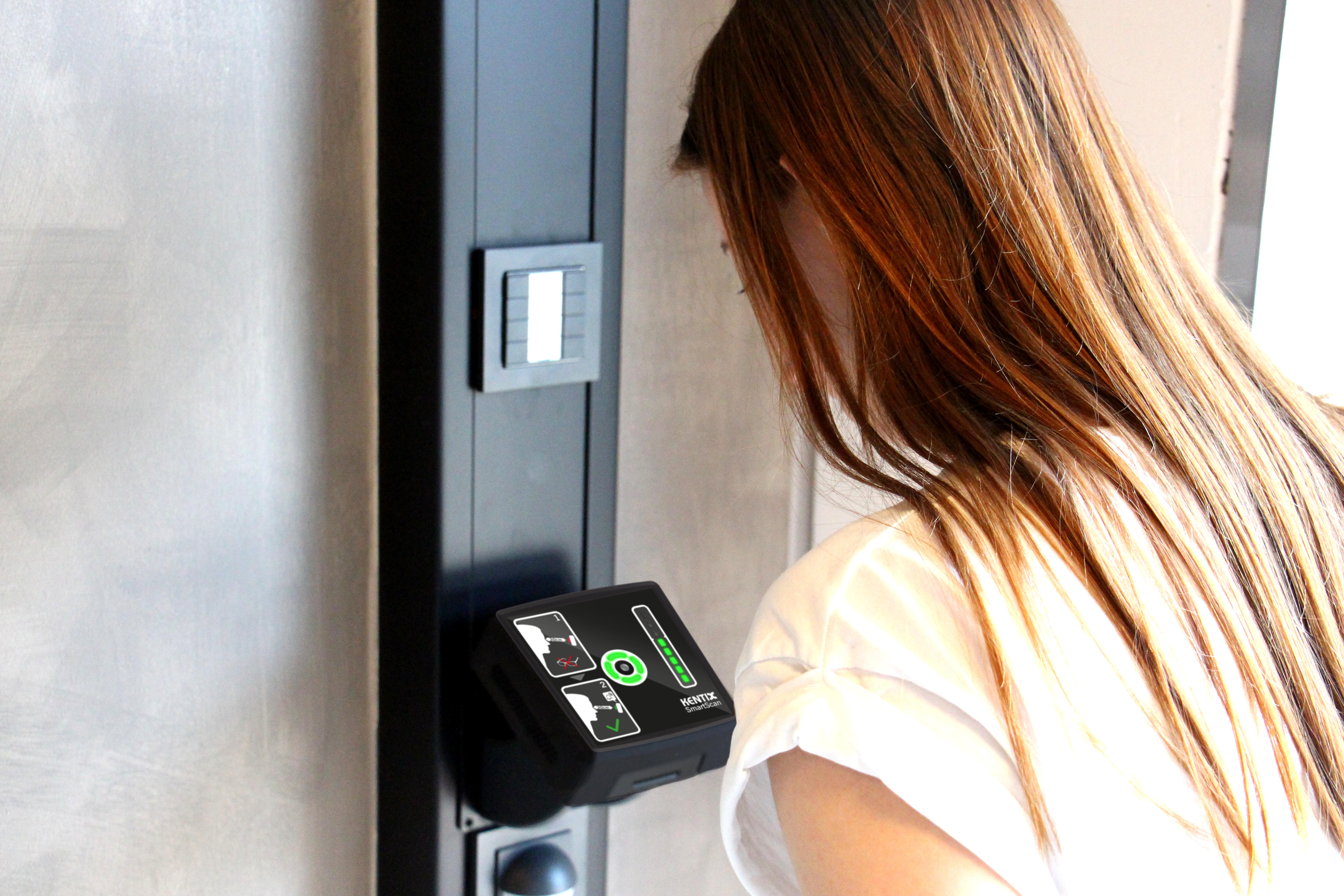 Because of the pandemic, not only is there now a concern of whether the correct people are allowed access to a building, there is also the concern of whether that person is likely to spread a disease that they are not even aware they are carrying. This is why Kentix have designed the SmartXcan to not only act as a stand-alone unit to advise the user whether or not they have a fever – the first symptom of a viral infection in 90% of cases – but to also integrate with an access control system through its multiple interfaces.

Using anonymous readings via its thermal imaging camera, and deleting them quickly after reading, allows the SmartXcan to be fully GDPR-compliant, and using contactless technology it removes the concern of itself being a surface for COVID-19 to spread.

With stock readily available, the Kentix SmartXcan provides an ideal solution to help protect those who are unable to work from home. For assistance with developing your IoT solutions and integrating devices with your existing equipment get in touch to discuss your requirements.

LoRaWAN is a communication protocol used in Low-Power-Wide-Area-Networks (LPWAN).  It can be considered the equivalent to the 2nd and 3rd layers of the OSI network model (the data-link and network layers).

Typically, LoRaWAN operates on top of LoRa which is the equivalent of OSI layer 1 (the physical layer).

If comparing this to an Ethernet/IP network, LoRa is the physical cables and LoRaWAN is the MAC & IP layers.

One thing to note is that the terminology “LoRaWAN” is normally used to refer to LoRaWAN over LoRa. In actual fact, LoRaWAN can operate over FSK radio too (but this is not commonly used).

So What is LoRa?

I’ve already said that LoRa is the physical layer. This means that it defines the radio modulation used for the wireless communication. It’s how the 1s and 0s are converted to waveforms and sent over the air.

LoRa operates in the sub-Gigahertz ISM (Industrial, Scientific & Medical) frequency bands. The frequencies used vary from country to country but in Europe this means 433MHz & 868MHz. Sometimes these frequencies are referred to as “unlicensed” or “unregulated” bands but that is not true. They are regulated in Europe by ETSI, but they are free to use.

LoRa was developed in France and the patent is owned by a company called Semtech. They license the technology to various chip manufacturers around the world.

It uses something called chirp spread spectrum. A series of 0s and 1s are transmitted using sequences of fast rising and fast falling “chirps”. This is similar to how radar systems work, and echo location used by bats. This allows for very long range communication with a low power usage and very good resistance to interference.

LoRaWAN sits on top of LoRa and defines communication protocol and network architecture of the LPWAN.

A LoRaWAN network consists of numerous node devices  talking to one or more gateways/concentrators which are sending data to & from network servers which are themselves relaying the data to application servers.

In LoRaWAN, devices can operate in three different ways:

Get Started Today with a LoRaWAN Proof of Concept Kit